Release your best recorded material and let the world hear your talent. It doesn't matter what level you are on - you will get constructive feedback to increase your skills.

Please go back and fix as many of your old songs as you want.
Post Reply
1 post • Page 1 of 1

Feel kind of like an Illestlyrics fossil. I haven't posted any music nor have I really been an active participant since 2013. What can I say? Life gets in the way sometimes. I hand full of recording sessions, 3 children and 6 years of OTR truck driving later, and I think we finally got something worth putting out. 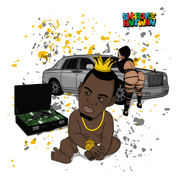 Return to “The Booth”